Waste water treatment should not involve any methods, which disrupt water structure and change water biological activity. The properties of treated waste waters must be close to those of natural water.BIOTAL technology is based on a concept different from the classic one, namely: to treat waste waters and to process treatment products until consumption products are obtained - service water and organic-mineral fertilisers. Well-treated waste waters can also partially solve the water supply problem as they can be used for service purposes, while poorly treated waste waters involve the problem of their discharge and eventually pollute the environment. The stabilised and dehydrated surplus sediments, released by the system, can be excellent organic-mineral fertiliser.

Considering the specific operation features of small treatment plant, which function under conditions of high irregularity of hydraulic and organic loads and changes in the composition and properties of arriving waste waters, BIOTAL engineering solutions were mainly directed to ensuring high quality of treated waters and stable operation with reasonable capital investments and energy consumption. 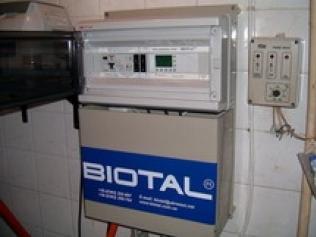 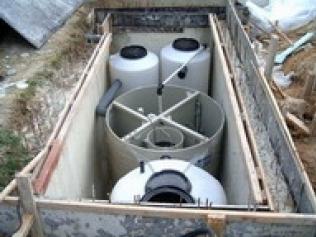 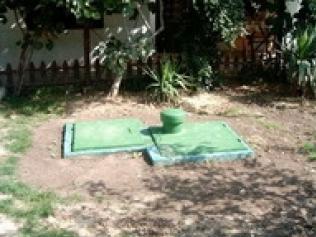 
1. BIOTAL Plant includes three consecutively connected SBR-reactors. Thanks to the technology design, the treated waste waters pass through a complete cycle of biological treatment in each of the three SBR reactors, while flowing through them.

2. If there are no waste waters arriving to the BIOTAL Plant, it automatically switches to First (after 1 hour), Second (after 24 hours) and Third (after 168 hours) Economy Mode of Operation. This makes it possible to considerably reduce the consumption of electric power and to extend the life of the equipment.

3. The Plant automatically switches into Forced Mode of Operation in the event of sudden and large inflow of waste waters in quantities exceeding design values. This is ensured by the automation, winch instantaneously switches the last SBR Reactor into a Settling Mode of Operation with subsequent pumping out of cleaned waste waters into the tertiary settling tank. Also, the last SBR Reactor starts operating into a Settling Tank Mode, while the first and second SBR Reactors - into Modes of Intermittent Aeration Tanks. During this period the arriving waste waters are collected into the accumulating reservoirs formed during the start-up of the controllable airlifts in the first two SBR Reactors. This prevents any insufficiently cleaned waste waters from flowing into the tertiary settling tank. The accumulating reservoirs help the Plant to deal with the sudden and large inflows of waste waters (up to 25 % of the 24-hour consumption).

4. Nitrogen and phosphorus are some of the main pollutants in waste waters. In the treatment plant with active sediments and continuous aeration it is possible to establish conditions for simultaneous separation of nitrogen and phosphorus in a biological way. In order to achieve this, it is necessary to ensure the alternation of conditions for desoxidation and oxidation of active sediments aged more than 25 days. In view of the small volumes of the treatment facility and the impossibility to combine the living conditions of the aerobic and anaerobic micro-organisms in the active sediments, it is not recommendable to create anaerobic zones. It is more efficient to alternate the desoxidation and oxidation modes in the waste water treatment process. Under such conditions, facultative micro-organisms develop, which actively participate in both aerobic and anaerobic treatment processes. Thus the quantity of aerobic sediments is increased in the system and nitrogen and phosphorus are effectively separated. BIOTAL System has a self-regulating hydro-pneumatic system ensuring the circulation of sediments between the separate zones at intensity corresponding to the quantity of arriving waste water. The system allows corrections to be made in the sediment re-circulation level and the quantity of dissolved oxygen in each zone separately.  The separation of nitrogen by denitration involves a deep nitrification of the ammonia nitrogen and the availability of easily oxidisable organic substances in the waste waters. In order to ensure effective denitration, it is necessary to have a certain ratio of BOD, nitrites, nitrates, easily oxidisable substrate and a certain quantity of dissolved oxygen. It is impossible to maintain optimal ratio of these indicators, especially under conditions of highly variable fluctuations in the quantity and composition of arriving waste waters. There is re-circulation between the zones of BIOTAL Plants even during periods without any inflow of waste waters. Thus, the mixture of sediments with constantly changing indicators gets into one and the same zone numerous times and eventually we get effective denitration. As the nitrites and nitrates in the returned active sediments get into anoxic, not anaerobic, conditions, they are not reduced to ammonia nitrogen.

6. Because of the high age of the active sediments (more than 25 days) and, respectively, their high mineralization, the dehydration of the surplus active sediments takes place without adding flocculent. The quantity of nitrogen and phosphorus in the waters treated by biological treatment plants depends also on the outflow of small particles of active sediments from the settling tank. BIOTAL Plants have a tertiary settling tank, which retains the tiny sediments, while a special airlift ensures their transfer to the Plant entrance.

7. Operation of BIOTAL Plants in winter. The System is mainly designed to treat domestic and sewage waste waters at a temperature sufficient for biological treatment. In addition, the process of biological treatment is accompanied by heat release, and the air in the compressor heats up when compressed, thus further warming up the sediments in the system.

8. Operation of BIOTAL Plants during electricity blackouts. In such cases the accumulating reservoirs are filled up and the treated waste waters are gradually pushed out of the system. The Plant also operates as a five-grade settling tank, which can effectively retain oils and floating particles, thus protecting the drainage fields from silting. Even in the event of a long blackout period, after electricity is restored, the system can restore its normal operation in several days without any additional measures to be taken.