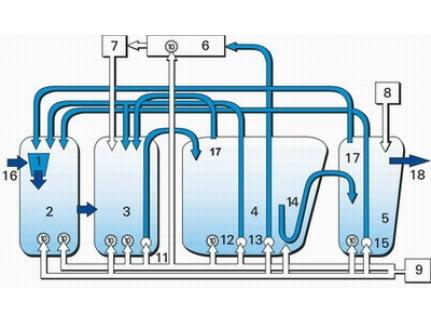 BIOTAL Plant itself operates as three consecutively connected waste water biological treatment plants, where the last SBR Reactor periodically switches from a settling mode of operation with subsequent pumping out of treated waste waters into the operating mode of a tertiary settling tank or a self-cleaning filter for further cleaning.

Waste waters enter the large waste catching chamber, where the wastes undergo an intensive aeration and as a result most of the large wastes (such as toilet paper, etc.) are ground down. The water, free of large wastes, flows into zone І, where some of the returned active sediments are fed from zone ІІІ by airlift (14), as well as sediment from zone ІV, and the foam  pushed upwards while the treated waste waters are pumped out by airlift (15). In zone 'І' the waste water is partially cleaned biologically, undergoing numerous alternating cycles of aeration and mixing in an air-deficient environment; a process of denitration also takes place here as there are available nitrites and nitrates in the returned active sediments and easily oxidizable organic substances in the arriving waste waters.

The mixture, after being treated in zone І, passes into zone ІІ, where the other part of the returned active sediments is received through airlift (14), which makes it possible to protect this part of the sediments from the negative impact of the toxic substances entering the system. Also, the foam from zone III is also pushed to zone ІІ while the sediments are being pumped out to zone ІІІ by airlift (13). In zone ІІ, similarly to zone І, the sediment mixture undergoes numerous alternating cycles of aeration and mixing. As more than 50% of the organic materials are oxidized in zone І, a nitrification process begins in zone ІІ. As both nitrites and nitrates enter zone II and zone I with the returned active sediments, there are two parallel processes in these zones - nitrification and denitration. The nitrification process becomes dominant in the oxidation process. The partially treated mixture is transferred from zone ІІ, through airlift (13), to zone ІІІ, together with gases (carbon dioxide, etc.) formed during the process of waste water treatment in zones І and ІІ, and accompanied by an oxygen saturation of the sediment mixtures due to the interaction with the air. As the content of organic materials in zone III is low, here there is mainly oxidation of those organic substances, which cannot be easily oxidized, as well as nitrification. The treatment process control allows for the ammonia nitrogen to be oxidized primarily to nitrites (redox-potential - up to 100), which allows for a faster and more efficient denitration (the chain of nitrite reduction to gas-like nitrogen in this case is shorter than with the nitrates). In zone ІІІ, similarly to zones І and ІІ, the sediment mixture undergoes numerous alternating cycles of aeration and mixing; in addition, there is also settling with subsequent pumping out of treated waste waters by airlift (15) to tertiary settling tank ІV. Airlift (15) also blows the foam in zone ІІІ. While the treated waste waters are pumped out to the tertiary settling tank by airlift (15), airlift (17) pumps out the sediments from zone ІV into zone І. The treated waste waters are discharged by the system.